My brain from my childhood has been told and seen that my hands shake (essential Tremor). Though the tremor rarely affected my life. I soon came to realised that it increased in intensity sometimes while it decreased sometimes. I always got very different viewpoints from very different people regarding the same in my life. Neurosurgeons told me its fine until it does not affect your regular life, people stared at me, some showed pity, some made fun, some gave suggestions to go to the gym, etc. Sometimes It got socially awkward, but over time I developed the confidence to face it. As per my observation, it was sometimes the external influences like people watching me, weird happenings, holding cups of tea, stress all exaggerated its influence on me. Soon I realised it was me who was exaggerating it (My brain was tricking me).

I thought of meditating and thinking about the phenomena of hand tremor. After a while, I realised the phenomena of hand tremor was impermanent and it was due to causes, effects of my brain. My brain due to my past experiences had taken it as permanent phenomena. The experience of trembling was something like this: Whenever my hands shook, there was some experience like once I dropped cups of tea, I could not drink tea. My brain started forming connections with these experiences though they were not important and should have been forgotten. Another case sometimes people made fun of me (its fine as it was something which was new for them), again my brain associated a connection to hand trembling which always further aggravated the situation. The tremor was always increased whenever I associated a past experience with it. Soon the bond became so strong that brain automatically associated it and increased it. Whenever a situation came rather than thinking tremor as impermanent phenomena or just a state of mind which will pass through, my brain always exaggerated it. It became like a habit.

If I further break the experience in parts (An analogy):
State 1: Day 1
My hands shake – neurone A of brain starts sending electrical signal to neurone C (hand Tremor)
Tea fell from my hand – neurone B forms a connection with neurone A
A bond is formed between A- -B

State 2: Day 10
My hands shake – Bond between A- – – -B becomes more strong and they amplify the signals they send to neurone C 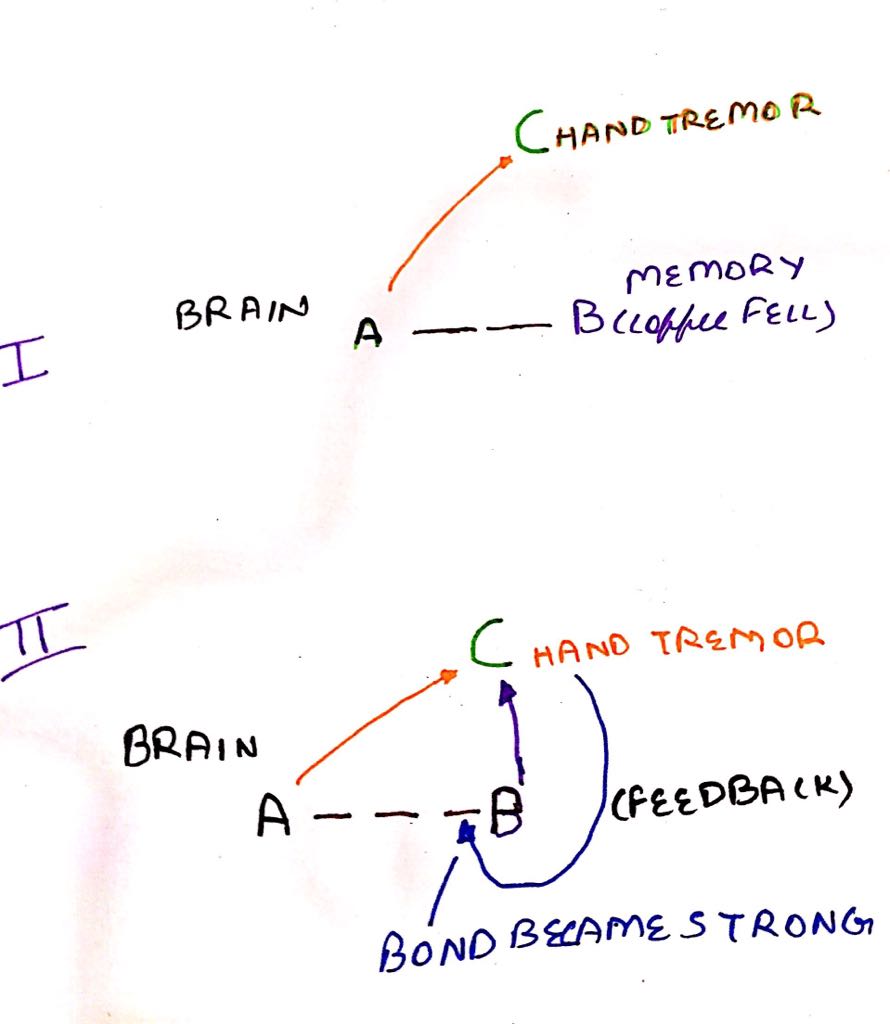 State 3 (Day 765): Further A forms bonds with D(stress), A and B develop new bonds gather more feedback from the environment and effect C (Hand tremor) 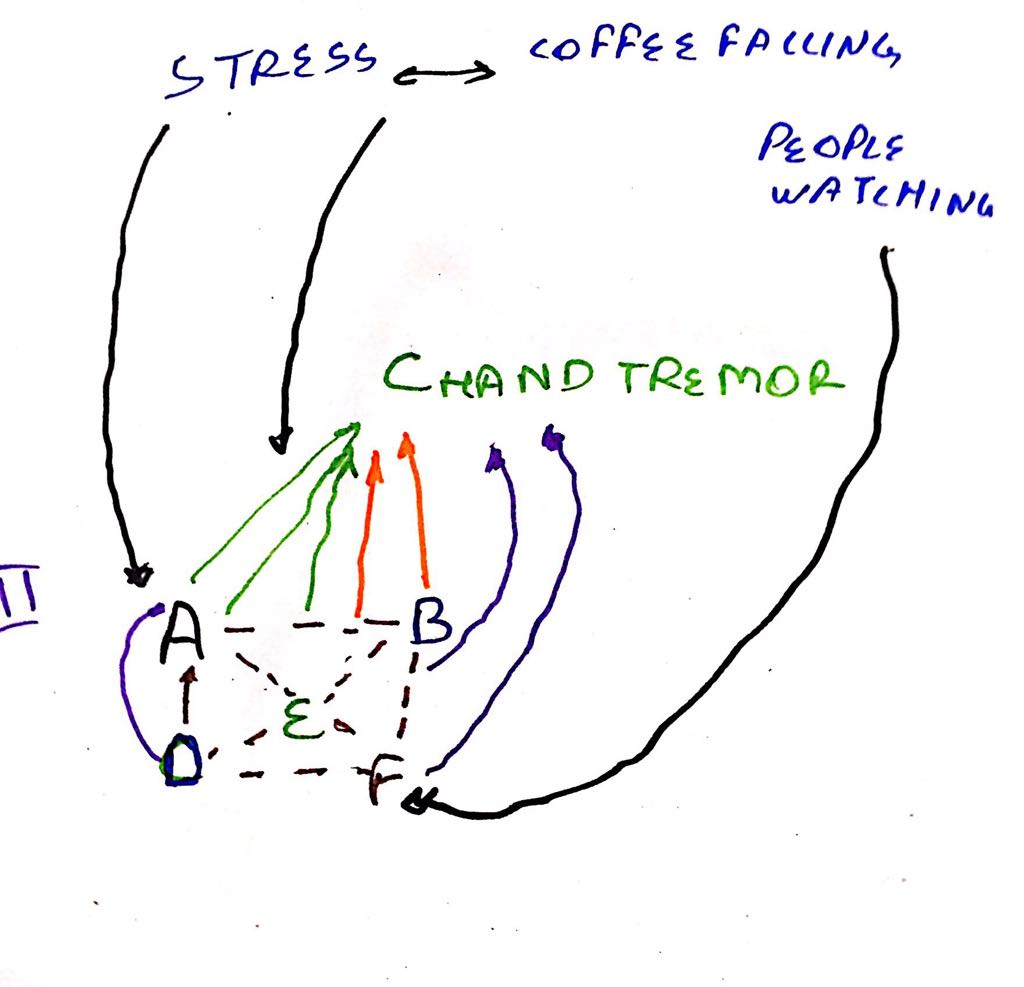 It was like a never-ending loop which became stronger and stronger as the time passed.

Another way of thinking could be if observed life is like still photographs. Your brain joins together photographs to form a movie. Another one, when we start learning or driving a car we are learning it is very tough when the connections in our brain are formed, driving a car becomes an automatic activity. Soon we forget wearing seat belts thinking we are very good drivers. We also start talking on phones while driving, as we start believing we are excellent drivers and our brain further reinforces this belief of being excellent drivers whenever we drive with a phone in hand.

So how to improve or declutter this thinking of my brain. I started realising the phenomena of hand trembling is impermanent (or like an illusion) and it is just a state of mind. The external factors should not influence it. My realisation regarding impermanence has automatically reduced the exaggerated tremor my brain reinforced. Whenever I observe my hand tremor, I get the feeling in my mind which students get when they are young, listening from left ear and releasing from the right year (which passes on gently). My previous mind can be compared to listening garbage from left ear and storing in your head and making thoughts out of it and releasing the garbage from the mouth.

Another analogy, now my brain considers trembling as a wave which passes on. My previous mind considered the wave, stored the wave, processed the wave which led to new wave and further exaggerated my experience, which gave rise to a new wave.

Whichever habit/phenomena good or bad, meditate on it realise the phenomena how it happens (be it anger, jealousy or extreme excitement, Lust or some business assignment or eternal happiness) the awareness of the phenomena will itself improve your thinking. Break the phenomena into parts and then see how the whole system works, there will be some clarity to see the sun (true picture) beyond the clouds of your thinking. Over time, the sun will start becoming clearer and clouds will start clearing to help you see the clear picture.

When you start thinking/meditating on the phenomena, this is how the process will work

After meditating or thinking about the phenomena (State 2): 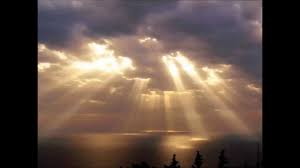 After practising the new improved though in your daily life (State 3): 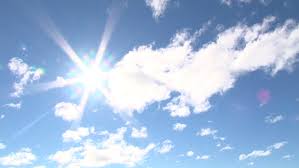 The good thing about the process is once you start thinking deeply (meditating), you can never leave it after practising a certain while- Its addictive. Next time you want to stop smoking and really think about it, try this process of meditating/thinking about smoking for a time as phenomena to find What lies deep within. Once you see the entire truth you will appreciate both all states of mind. Over time we start appreciating and realising the states of mind and can use various hacks to train our mind.

One thought on “Fuzzy Brain”